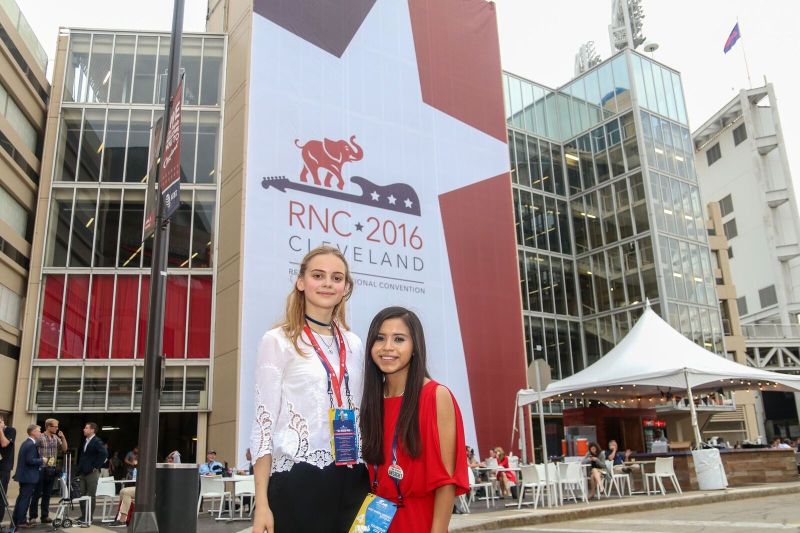 I arrived in Cleveland on Tuesday evening with four students and two faculty members from Meredith College, and we attended three days of the convention. Our group was interviewed by several media outlets, including WRAL and Buzzfeed! Some of the students from our group saw Chris Christie, Rick Santorum, Debbie Wasserman Schultz, and Megyn Kelly.
Generally, the atmosphere was astounding! Even though with our guest credentials we sat far from the convention floor, it was incredibly inspiring to see some influential Republicans speaking in front of us. Seeing the audience’s reaction was quite fascinating to me, as I’ve never seen so many people gathered in one place who were extremely passionate about politics and responsive to what was going on. Most of the speeches were very energetic. There were plenty of excited Republicans both inside and outside the arena, as well as folks who wore Bernie tees or held protest signs outside the venue. Nevertheless, the security was just top-notch. Even though I’d had some reservations about my safety at the RNC before arriving in Cleveland, as soon as we went out on the streets of the city I felt 100% safe.
Apart from going to the convention itself, we visited Rock ‘n’ Roll Hall of Fame, which was totally amazing as I got to see some of the Beatles’ real letters, instruments, and handwritten song lyrics. We also attended some events with the NC delegation, including breakfast with Eric Trump and his wife, Lara.
It was very motivating to see history in the making and make contacts with people from all over the country. I’m very grateful that I have an opportunity to experience this all over again at the DNC this week!